Will a Stock Market Crash Destroy Your Portfolio? 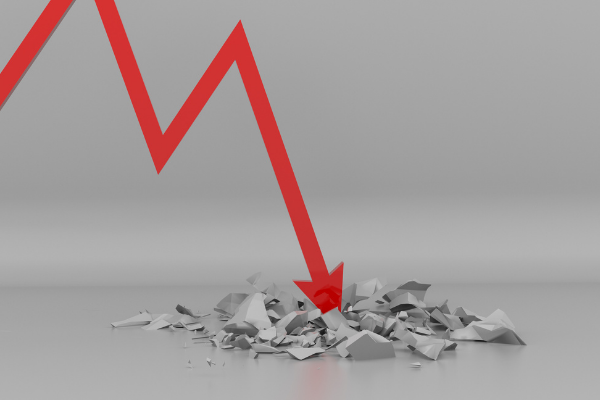 26 May Will a Stock Market Crash Destroy Your Portfolio?

The US stock market has seen its ups and downs since the start of the year.

Some have called it a market crash.

After all, the NASDAQ did peak in mid-February and subsequently, fell by over 10% in less than a month.

The market correction lasted for a single day.

From there, the tech-index promptly reversed and marched upwards from its trough.

By late April, the NASDAQ was back up, closing within a whisker away from its February high.

Then came another round of declines.

This time, the NASDAQ fell by around 7.5% from its April peak.

According to the financial pundits, inflation is to blame for the latest fall.

The wheel on the stock market goes round and round

Of course, just as inflation was supposed to wreak havoc on the stock market, the NASDAQ turned upwards again.

Today, we are sitting at a level that is around 3% off last month’s peak.

Again, the stock market watchers have another explanation lined up.

According to them, concerns over inflation, which I should remind you was present less than two weeks ago, had conveniently faded away.

We should now be watching what the US Federal Reserve has to say, they say.

I don’t know about you, but I have had just about enough describing the twist and turns in the narrative above.

If I continue, I could end up writing a novel that would rival JK Rowling’s Harry Potter series.

Was that information useful to you?

So, let’s examine the concerns that have been brought up.

According to one stock market pundit, inflation is a positive for stocks until it becomes too much.

As the reasoning goes, the pressure from inflation, if left unchecked, could lead to higher wages and subsequently, lower margins for companies.

So, now you know what is happening.

But the thing is, how does the information above help you invest better?

In my view, the explanation above offers little to nothing on how you can make money in the stock market.

As a Smart Investor, you have the choice of how you spend your time.

And I would argue that your time is better spent on finding a business that has the ability to raise prices without suffering a big fall in demand.

That way, even if raw material prices or wages increase, the firm’s pricing power will be able to weather the storm better than competitors that do not possess the same ability.

Even better, you won’t have to worry about the spectre of inflation rearing its ugly head in the future.

Not in Your Best Interest

The other stock market worry, of course, is interest rates.

Pundits suggest that higher interest rates are a tool to tame runaway inflation.

As such, if inflation were to rise higher than expected, then central banks may be spurred into raising interest rates. Bank loans will become more expensive as a result, thereby causing a drag on how much a business can earn.

But if the concern is higher interest rates …

There is always the option for you to pick companies that do not rely on the kindness of banks to sustain themselves.

There are a good number of companies out there that are operationally self-sufficient, generating enough cash flow to sustain their business without having to go hat in hand to banks for money.

That’s because, over the course of the past decade, we have kept our focus on looking for companies that can generate cash, hand over fist.

And when they do so, shareholders are rewarded with dividends or capital gains.

As Peter Lynch once said, there is always something to worry about in the stock market.

But it does not mean that we have to sell our stocks at the first sign of danger.

If we do so, we may miss out on the eventual upturn that can happen at any time.

As I have shown in my first example, you could miss a day and be sitting on the sidelines while the market moves upward again.

Instead of focusing on stock prices, we prefer to focus on the business behind the ticker.

For us, it is much more important to find companies that possess pricing power than to worry about inflation.

Likewise, we think that businesses that can sustain themselves using internally generated funds deserve more attention than where interest rates are headed next.

And from May to July this year, we are taking another step by focusing on a trend that is expected to unfold over the next decade, regardless of where inflation or interest rates will rise.

I am talking about cloud computing, of course.

We think that the trend will continue into the future and will be positioning The Smart All Stars Portfolio to take advantage of this growth.

Disclosure: Chin Hui Leong does not own any of the shares mentioned.